Deb Brown has always been a gravity fan. She started out by using a combination of gravity and snow to make magic — competing in snowboarding in her native Oregon. She loved it for many years, but in time the pursuit started to lose its luster.

“After my snowboarding career had ended,” Deb muses, “I was on the hunt for something else.”

And hunt she did. She went all-in for change. Indeed, she decided to switch it all the way up from snow pants to grass skirts, and moved out to Hawaii. When she got there, she was in the mood to explore some new adventures and turn up all the dials on her life. Sure enough, skydiving was at the top of that list.

“Then, of course, it went how it always goes,” she laughs. “At first, it was a group of six girls, and it whittled down to two.”

As you might imagine, the jump went very well. “Halfway through my tandem skydive,” Deb remembers, “I knew I couldn’t not do this.” She showed up for her first day of solo skydiving training within two days of that first tandem. Deb earned her license in record time and spent the next couple of years honing her skills and earning her ratings in the singularly intense conditions of that beautiful North Shore dropzone.

Deb came to our gorgeous Southern California home soon after that. Her goal: to pursue and grow her full-time skydiving career, which had been decidedly aligned towards teaching skydiving to military personnel. This year, Deb became one of the elite professional female skydivers to hold a Tandem Instructor rating from the United States Parachute Association.

We’re incredibly lucky to have Deb on our team–which is a pretty unusual team, if we do say so ourselves. Skydive Perris is pretty unique in the world for the unusually high number of fantastic female instructors we employ on our dropzone. That’s by design; we love to inspire the people who come through our gates with the proof that professional skydiving is by no means gender-exclusive.

“There are four awesome female Tandem Instructors at Perris, which is so, so cool,” Deb enthuses. “When I started skydiving, my understanding was that females did not instruct tandems. The implication was that it just isn’t a job women could do. We’d just be told, Don’t even try. You’re not strong enough.”

“It wasn’t until I got into the military work,” she continues, “and I started seeing some really badass females that my mind started to change. It had to change. There were several female tandem instructors, too, who I saw doing great work, and they weren’t the tall, built women that I had previously seen in the job. Those women really made me start looking seriously into it. I was meeting these female smoke jumpers, too. I thought, ‘Y’know what? If she can jump into a fire with a chainsaw, I think I can skydive with another human being.’ And I did it! I can truly say I love my job. It is so freaking cool.”

As a female tandem instructor, one of Deb’s favorite parts of the job is getting to relate to her female passengers. 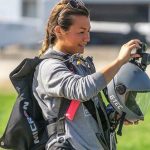 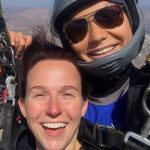 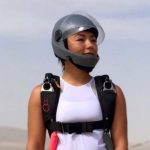 “As a woman,” she explains, “It is easier to be more in tune with all types of tandem passengers, but especially females. At first, most of my female students had made requests for a female tandem instructor due to religious beliefs. These days, it’s a little different. I am getting a lot more requests from females who are just more comfortable jumping with females. It is really cool. I feel like I can relate even more.”

When Deb isn’t working, she sometimes takes off for the beach to surf — after all, she’s lucky enough to work at a dropzone where she can see the ocean from the door of the plane — but she’s almost always still on the dropzone on her off days, tirelessly dialing in her skills.

“I’ll tell you one thing about the team of female Tandem Instructors at Perris,” she smiles. “We don’t just want to be the best female TIs. We want to be the best TIs. Right now, I’m focusing on making each and every tandem skydive I do perfectly seamless for my student. Aside from that, I’m working quite a bit on my canopy work; on perfecting that part of my flying.”

“As a TI, I feel like my biggest role is a safety officer,” she explains. “I need and want to escort this person on a truly great experience, but overall my biggest goal is to keep them and myself safe. I’m really serious about it, and I really seriously love what I do.”

Categorised in: People Of Perris, Women In Skydiving