The Queen of Fun

Meet Katie Piele, A Tandem Instructor Who’ll Put a Smile on Your Face

Denver, Colorado native Katie Piele wasn’t always a professional freefall navigator–but she was uncommonly prepared to take on the task, to say the least. (She earned a degree in Physics, and let’s be honest, skydiving is just applied physics with a generous side helping of woo-hoo.) When she graduated, she launched straight into working offshore on an oil rig for a little bit, in the Gulf near Houston, Texas.

“That’s when I started skydiving,” Katie laughs, “because I really didn’t like my job. I did a skydive and thought, dude, this is, like, the coolest thing. So then I wanted to learn to get my license.”

She earned that license at Skydive Spaceland Houston. She actually moved out of her apartment and lived right there on the dropzone as she worked through the levels.

“It completely engulfed my life,” she smiles, “as it does with most people. I was super obsessed with it.”

Katie wanted to leave that oil-rig job to pursue skydiving full-time. To that end, her plan was to save up enough money until she could afford 300 fun jumps, and then she was going to quit and be at the drop zone for the whole summer. Then a wrench fell into the plan: an oil industry crash. Everyone’s pay, including hers, took a hit. Undeterred, Katie bought Spaceland’s unlimited jump package and turned in her notice.

“There went my life,” she giggles.

Katie moved onto the dropzone and, as many jumpers do, became a parachute packer full-time to support her hobby. She logged six hundred jumps that year.

“It was awesome. I had so much fun,” she enthuses. “When I first started jumping, I didn’t care about progressing. I was just incredibly pumped. I got really, really good at having fun on skydives.”

Coming off that super-strong summer, Katie decided that she really wanted to earn her tandem rating.

“I’ve always wanted to be a traveler and go on really cool adventures all the time,” she explains, “But I was always realistic about it. I can’t be poor all the time. I need to earn a wage. Tandem Instructors can have that flexibility, and I saw skydiving as a way to that goal.” 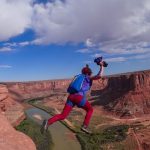 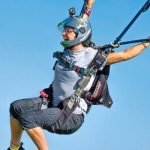 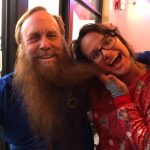 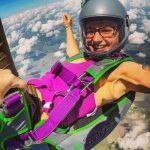 As you may or may not know, in order to enter a course to become a Tandem Instructor, a skydiver needs to prove that s/he has spent at least three years in the sport. Katie only had one. To continue to press forward in the meantime, Katie earned her Accelerated Freefall (“AFF”) instructional rating and started doing aerial videography, capturing the dropzone’s tandem jumps on camera. She started to travel to skydiving events at other dropzones, moving outside the comparatively small orbit of southern Texas. Before she knew it, the three years were up. She was ready to become a TI.

“That year was awesome,” she gushes. “I did so many tandems and I had so much fun.”

Finally, adventure travel became part of her everyday reality. She went down to work in Mexico, at Skydive Baja, then in Puerto Rico. She started expanding her parachuting and flying skills, pursuing swooping, BASE jumping and speedflying. Finally, she came to join our team at Perris. For Katie, even though she’s dead set on expanding her knowledge of the sport even farther in a more focused kind of way, at the heart of it, it’s still all about fun.

“The cool thing about being down here [at Perris],” she muses, “is there are a lot of people making this lifestyle work in unique, creative ways. It’s inspiring being around people that are trying to progress the sport in different ways and uniquely making this type of lifestyle into more of a career taking it beyond just being an instructor… The crew here is a good crew. Everybody is super-positive and inclusive.”

“I try to make sure every student is having fun,” she continues, “No matter how freaked out they are when they come to me. You can totally see it on their face. I just give them a big, silly grin and remind them to have fun. You can see their whole body relax. I’m a big proponent of having fun. If I’m having fun, I’m shredding, and if they’re having fun, so is my student!”