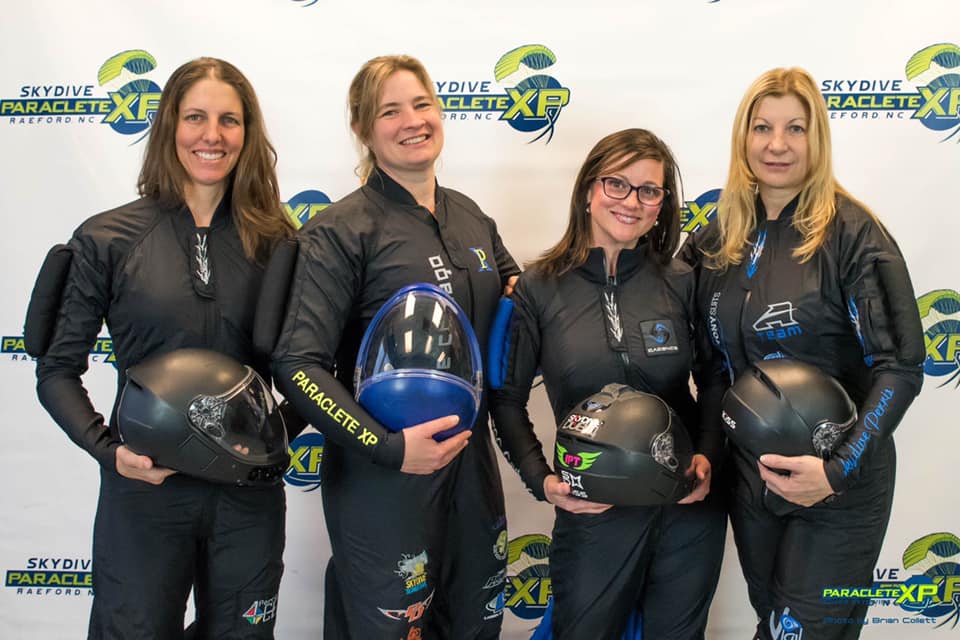 No Disturbance in the Force

Perris Force Rocks 4-Way (And Wants You To, Too!)

Perris Force — our hometown all-female 4-way RW team — has been taking the sky by storm from the start. The team’s five members (that is to say: Christy Frikken, Grace Katz, Shannon Catalano, ShaunaRae Miliano and Rachel Demers) are each incredible athletes in their own right, and the combination is so much more than the sum of its parts. The goal? In their own words, “to be a positive role models for younger skydivers and competitors” — and “to make an impact by helping others get and stay connected, by coaching, organizing skills camps and express overall enthusiasm for the sport.” We can’t think of any group of humans better prepared to carry out that goal.

To get a feel for the team, we talked to Shannon Catalano — Perris load organizer, AFF instructor, and head of the post-AFF student coaching program — who flies Tail on the team.

Shannon started skydiving about 5 years ago. She did it, initially, for love; her partner had been in skydiving for more than a decade before they got together, and Shannon finally decided that she would give it a shot. Predictably, she loved it, so she stuck with it and progressed.

Within a couple years of that first skydive — in 2016, to be specific — Shannon was asked to join Perris Force. At the start, the team was comprised of four women that didn’t have tons of 4-way experience but had always thought of putting together an all-women’s team: Shannon, Grace Katz, Sandra Vanderbilt and Lynn Mackerson. Shannon had around 500 jumps at the time. It was Shannon’s first 4-way experience.

“There was no turning back after I started 4-way,” Shannon laughs. “It is incredibly fun and competitive and amazing. I learn so much every time I do it.”

“Personally, I am highly competitive,” Shannon says. “There aren’t many things that I will do and not give it 110%. Four-way is just perfect for that, because there is such an excellent, ongoing opportunity to continue to learn and grow. There are so many nuances and finer points to understand and master at every level — not just in skydiving. It is studying video; visualizing; understanding what other teams are doing; that kind of thing. I just simply love it.”

Today, Perris Force is in its third year of competition. Over the seasons, as with all long-lived skydiving teams, the lineup has changed a couple times — Shannon and Grace are the only original members still with the team. The legendary Christy Frikken came on as a player/coach in 2016; ShaunaRae and Rachel are new to the team in 2019.

The team aims to do 40 hours of tunnel and 400 to 500 jumps this year — a huge commitment, to be sure, but there’s good reason: the legendarily hard-to-beat and government-funded Golden Knights female 4-way team performed their last year of competition in 2016. The next qualifying year was 2017, and Phoenix was selected the US women’s team (as they were the highest scoring all women’s team at the US nationals, with a 15 average). Perris Force just beat Phoenix in this most recent competition, so they’re smashing to pedal to the metal in pursuit of the space at the top of the national (and, to be clear, global) podium. Each woman keenly understands what will be required of her in order to make that bid. Each has made the tectonic life changes required to do so.

“I am an accountant,” Shannon explains. “I quit my job and I started consulting, which allows me to work from home and be flexible. Now, I can work my own hours. Grace sold her business and is currently skydiving full-time. Shawna Rae, who works as a nurse, did the same thing as I did, which was quit her normal job and pick up a job that allowed flexibility. She now works remotely.” Teammate Christy Frikken has been a professional skydiver for many years. ShaunaRae is in the process of moving out to California so Force can ratchet up the training schedule closer to full-time. As you can see, these athletes have their eye firmly on the prize — and, as a bonus, they legitimately enjoy each other’s company.

“My teammates are really great women,” Shannon smiles. “We have been so lucky over the past three years, in all the different iterations of the team, to all just get along really well and enjoy each other.  We have the same goals. We just really want to try and take the opportunity that’s here and maximize and do everything that we can to see how far we can go.”

Can you relate? Are you also the kind of person who wants to see how far you can go? Even if you have just a few jumps under your belt and you’re still a little dazzled by the folks walking around the dropzone in their super-cool matching suits, Shannon encourages you to get out there and put together a framework to learn in. After all, that’s the soul of a good skydiving team.

“Grab three friends,” she insists, “Get in the air and do 4-way. You have to start somewhere.  Check out camps in the tunnel and the sky — they’re going on throughout the country, and we have plenty of them right here at Perris. There are all kinds of resources on the web to start to learn the different formations and what it’s all about. And, if you’re here at Perris, get in touch with us! We are super passionate about it. We can point you in the right direction.”

“The most important thing,” she adds, “Is to just get out there and jump.”

To get in touch with Perris Force for coaching or more information, reach out through the contact form at perrisforce.com or the team’s Facebook page, facebook.com/PerrisForce. Perris Force are also hosting Fresh Meet and the annual Perris Sisters in Skydiving event, so come and meet the team!