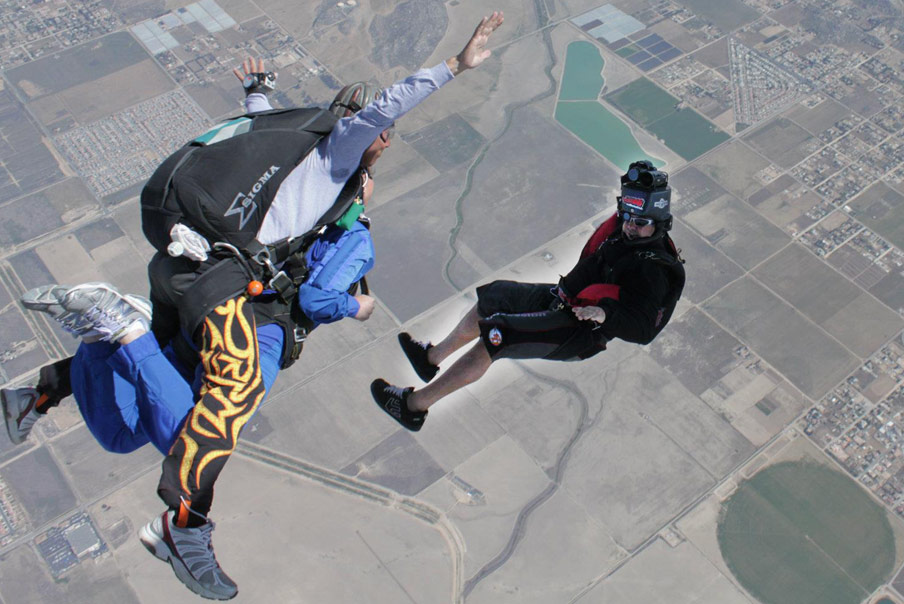 Skydive Perris is the largest skydiving center on the West Coast (and one of the largest in the world), and that’s not just because we’re the closest one to Hollywood. Indeed, the film industry has trusted Perris for many decades, a fact proven in our extensive list of screen credits. Whether it was a major motion picture in Iron Man and Godzilla, a commercial in Bud Light, or a TV show, webisode and independent film, we’ve helped scores of projects get (quite literally) off the ground. More skydiving sequences have been filmed at Perris — for screens big and small — than anywhere else in the world, and here’s why.

Great Location for a Film Office

Skydive Perris is the only US-based dropzone with a department dedicated to working with Hollywood, and it’s the closest skydiving center to LA’s Studio Zone. Because of that, film producers benefit from the one-stop-shop convenience that Perris provides. It’s also an ideal location for filming — a private desert airport with extensive land and isolated areas to provide privacy for Hollywood’s biggest celebrity actors and singers, from Tom Cruise to Miley Cyrus.

Skydive Perris has the largest fleet of jump planes in the nation, all of which have been heavily featured in the movies, including a beautiful DC-9 Passenger Jet that’s perfect for filming inside and out. Skydive Perris is home to several other kinds of aircraft, including small passenger planes, cargo planes with rear-exit tailgates, World War I replicas and hot air balloons. Several aircraft are even large enough to provide interior space for an entire film crew.

There’s the DeHavilland DHC6 Twin Otter that Skydive Perris was the first to purchase and operate in 1981. The Douglas DC-3, popularized through James Bond films. The Shorts SC7 Skyvans, our most popular and spacious plane for filming purposes. With all these and more, there’s a fit for all filmmakers and their crew.

Even aside from the long list of aircraft that calls the Skydive Perris campus its home, the dropzone offers productions a full range of other vehicles to rent: a fire truck, classic cars, man lifts, golf carts and anything else you may need for the shoot. The Pro Shop offers parachuting equipment and accessories for rent and sale, including full military/HALO outfits, specialized military gear and non-functioning parachutes/rigs to be used as props.

And if you’re looking for a space optimal for stunt coordination without jumping mid-air, the indoor wind tunnel at Perris is perfect to rent. It’s the only wind tunnel on a dropzone in California, and can be used for freefall illusions or air suspension.

Every major freefall cinematographer in the world has shot at Skydive Perris. One of the very best in the business, Craig O’Brien (the cinematographer who shot skydiving sequences for Iron Man 3, Godzilla, Mission Impossible, and The Bucket List) occupies an office right here on the dropzone. In addition to Craig — as well as the revolving cast of fellow aerial cinematographers who visit to do their work — Skydive Perris is proud of its full staff of experienced helmet-cam videographers who jump at the dropzone all day, every day, filming tandem jumps and other extraordinary skydives.

We help match talent to the project in front of the camera, as well. Perris’ film office works closely with a cadre of professional stunt coordinators and aerial coordinators to make sure each production looks great and is done safely, and we’re incredibly proud of the many times our dropzone has made an appearance in Hollywood’s bright lights. If you’re ready for the ultimate filming package, from pre-flight training to prop resources and post-production catering at our Bombshelter Bar and Grill, we’d love to see you here too!