Behind the Scenes of Point Break (Part II) With Dave Donnelly

Dave Donnelly was only 16 years old and not yet a skydiver when he was hired on to the Point Break production as a parachute packer and ‘gopher.’ Here, he shares his incredible tale from behind the scenes of one the most iconic, adventure-seeking movies in the 90’s and how he ended up making his first jump during a plane crash on set.

How did you get involved in working for the Point Break movie?

I had two skydiving parents, and grew up on drop zones. My Dad was a skydiving stunt man, and progressed to be an aerial coordinator for TV and motion pictures. While I was in high school, I would go spend my summers with him. When he was working on a project, he would get me hired on the job. That was usually packing parachutes, with other light duties mixed in as well. In the summer of 1990, he was hired on as aerial coordinator to a movie called “Johnny Utah”, but was later re-named “Point Break”.

We spent over a month on the aerial sequences. We started out filming at Lake Powell and got a lot of great shots there including the iconic shot Tom Sanders got of the 5 way dropping out of the foreground down toward the lake. I was in a safety boat right under the shot fishing for stripers and watching the stunt doubles land on the remote edges of the lake. Later in the summer, we moved to the drop zone in California City to shoot a different sequence in the film. That’s where things got weird.

You were so young at this time, and not yet a skydiver. Did you have an inclination of the impact Point Break would have in skydiving?

Not really. As you said, I grew up around it but I didn’t look at the sport in terms of member growth and how many jumps were being done at the time. But 18 months later when I was doing AFF in Perris Valley, I realized that the sport was experiencing a lot of growth in large part, due to the amazing cinematic images shot by Tom Sanders and Ray Cottingham.

You stated that you had an interesting story about Patrick Swayze in your Dad’s T-210. Can you elaborate on that story?

After the production was complete, Patrick wanted to do some jumping on his own to supplement what the stunt doubles had done during production. They did these shots at Skydive Perris, and because the ground was different than anything in the movie, they were all shot with the camera looking up at him. Patrick had met my Dad that morning to fly out to the DZ from Whiteman airport, to save a drive out there. My Dad had a really nice Cessna T-210 with a great jump door on it. The in-flight door had a handle that the pilot could operate to open the door and lock it in place. It could then be lowered and locked in place with another latch on the door itself.

On the flight home that night, Patrick was sitting on the floor of the plane and had not locked the door. At some point, he decided to get up and grabbed the in-flight door handle to help himself up. Since it wasn’t locked, the door instantly popped open and the handle moved toward the open door, as it is designed to do. I’m not sure how close Patrick came to going out the door, but my Dad grabbed his shirt and pulled him away from the door until he got it closed. The T-210 cruises at around 170 knots and the door opens quickly and with a lot of noise at that speed. From what I was told, they were both extremely startled by the event, but laughed it off.

You weren’t yet a skydiver at this point, but you happened to make your first jump during the production. Tell us the events that lead up to that first jump:

While we were in Cal City working on the sequence that was supposed to take place over Mexico, it was really hot. It is the Mojave desert after all. It was early August and well over 100 degrees. For the shot we were working on, the stunt doubles would exit the aircraft with a helicopter flying left trail. A Twin Otter had a camera crew shooting out of the side door and zooming in the doubles and they fell away from the camera. They did several takes, and I was in the Otter with an emergency rig on during these flights to get off the ground and out of the heat. I remember very clearly on the first flight being surprised that the pilot and DZO, Van Pray Sr., wasn’t wearing a pilot rig. I asked him about it and he brushed me off saying something like he didn’t need one.

On the third flight of the day, I had asked the assistant director, Carla McCloskey, and the hair stylist, Bunny Parker, if they wanted to come for a ride to cool off. They said, “Sure!” My Dad agreed provided they had on emergency parachutes and that I trained them how to use them. On this particular load, there were three stunt doubles on board. I believe, (though I may be wrong), that the stunt doubles were Jim Wallace, Jake Lombard and Jeff Jones. Other doubles on the film were Ted Barba and Jeff Habberstad. Also on board was my Dad, and two other jumpers on the production crew, including Jerry Meyers, as well as myself and the two ladies I invited along. And of course, flying was Van Pray with no rig on.

The fun jumpers were there to get the camera angle right with the helicopter and to get the best sun for the shot. As they got ready to exit, I moved next to the door to watch them exit, while holding on to a seat belt. As they left the door, I saw the helicopter turning to the right to start circling over the jumpers. But this time he was MUCH closer and when he went out of my view over the top of the tail, I felt an impact, and the plane yawed hard to the side. Clearly, he had hit us. One of the stunt doubles went up to talk with Van and then he ran to the back and looked out the door at the tail of the Otter. When he came back in he was very wide eyed, and went up to report to Van the extent of the damage. The three way left the plane around 8,000 feet, and now were probably around 7,500 feet or so, and descending. I moved forward to hear what was going on. I got there in time to hear Van tell the guys to get out. One of them asked him what to do about us, and he quickly replied “Take ‘em with you”. That’s when I realized that after spending my 16 years on drop zones, I was going to make my first jump immediately.

All of the stunt doubles were AFF instructors, and two of them began their 15 second first jump courses with Bunny and Carla. The third double was still up front, so after taking off my favorite hat and throwing it up front, I walked to the door. I put both hands on the ripcord and hopped out poised, to look up at the plane. I was wearing shorts, a t-shirt, and Tevas. I had no altimeter or goggles. I don’t remember pulling, but I remember seeing the Otter flying away as I got opening shock under Jerry Meyers’ ram air pilot rig. I lost the free bag and the ripcord, which he still reminds me of. Bunny and Carla and their instructors got out just after me and they deployed under their rounds right in front of me. I spent the descent just flying around the two rounds so that we stayed together. We were way out over the open desert by now. I was able to tell which way the wind was blowing, and I turned into the wind and landed the square standing up.

Bunny broke her tail bone on landing, and Carla was fine. Van Pray was able to fly the Otter over to Mojave airport because they had a full fire rescue station. On the way over, he was able to straighten out the remaining rudder by stomping on the rudder peddle and got it flying straight. He landed without incident. The helicopter was in much worse shape. They (pilot and camera operator, neither of whom had a parachute) had a bent rotor, but it did not snap. It was vibrating like crazy though and they were forced to shut down the engine and do an autorotation. They did this successfully and walked away from it. I was pretty fired up about what had just happened. We were found out in the desert within an hour or so, and I was happy to eventually learn that everyone survived.

Did you want to learn to skydive before that moment? And how did you handle the aftermath of your first jump? Did it inspire you to pursue skydiving or scare the hell out of you?

I had gone back and forth for years about whether I wanted to be a skydiver or not. And even right after the incident, I wasn’t sure. But once I got into college in Arizona and went to visit the DZ in Eloy, I started dreaming about skydiving. Then I knew it was happening. Jim Wallace graciously taught me how to skydive. I was very lucky to have him as my instructor.

What was your favorite part of working on the set?

I had been on sets since I was very young. I always liked it. On this film I was really seeing things more as an adult, and that made it much better. More freedom, more responsibility and now that I could drive I became a gopher. Go-fer coffee, go-fer doughnuts, etc. All the sets I was on were second unit, so I never met any of the actors on the film. I would have loved to meet Patrick Swayze.

Overall, how did working on the movie change your life?

It got me into the sport. I probably would have gone that way anyway, but having the best first jump story at the campfire didn’t hurt. Skydiving changed my life in very profound ways. From collegiate skydiving teams and competitions to being in Eloy during the freefly revolution, to working as a jump pilot, I look back on those times with gratitude and appreciation. I don’t jump that much these days, but I still stay current. Skydive Truckee Tahoe opened last year in my backyard, and being able to ride my bike to jump in one of the most beautiful places on earth is amazing. 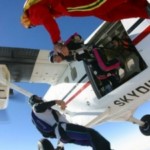 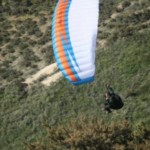 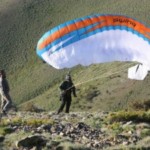