An Interview With Our Very Own Dan BC

Talking to Dan Is Better Than Coffee (And Always Inspiring, Too!)

Dan Brodsky-Chenfeld, or “Dan BC”, as most people refer to him, is one of the most decorated skydivers in the world. He’s also one of the world’s best-known skydivers, known internationally for his autobiographical book, Above All Else, for his TED Talk and for his outreach as a keynote motivational speaker. We’re deeply proud to count Dan in our Perris family, as he’s a standout ambassador for our sport at large– and has had an enormous, positive influence on the safety of the sport, and its capacities.

We cornered Dan the other morning–no small feat, as his job as General Manager at our always-bustling dropzone doesn’t leave a lot of spare moments–and nudged him to share a few stories and a little wisdom. Here’s what he had to share. (Spoiler: Dan never disappoints when it comes to stories and wisdom.)

Us: You’ve already done so much in skydiving, but you keep reaching forward. What’s the thing that always keeps you looking for that next level?

Dan: It amazes me, sometimes, when I realize I’ve been skydiving intensely for 37 years now. There were years when I was doing a lot of team training. Our team would do over 1,000 jumps a year–and then I was still doing other organizing, coaching, and fun jumps–so the number ended up being more than 2,000 jumps a year.

Sometimes, I thought “I need to get a life and get this skydiving thing out of my system. I know what I’ll do, I’ll jump twice as much. If I’m doing 2,000 jumps a year I’ll definitely get sick of it. But the more I jumped and the more involved I got, the more I liked it…so that strategy backfired completely (laughing).

After all these years, I still just love the sport. I love jumping. I love getting on airplanes. I love being up in the sky, and I am amazed at how much I appreciate every jump that I do, even when I’m doing a solo–to simply fall through the air, to be one little speck in a huge sky; to appreciate how cool that is. Right now, when we jump, we’re looking at snow-covered mountains out one side of the plane and the beach out the other. It’s so beautiful.

Pursuing skydiving takes more than ambition. It requires that love. But in skydiving, it’s not enough to just love the sport. You also have to love the community, because the sport–no matter how much you jump; no matter how many jumps you do, and how active you are–won’t sustain itself if you don’t love the people. Think about it, the actual jumping is such a small portion of your day. Even if you crank out ten jumps from sunup to sundown, that’s only 30 minutes out of your entire day that is actually spent skydiving.

Luckily, it’s easy to love the community. It’s so special. All the different people from different walks of life. People from 18 to 85 with different personalities, nationalities, ethnicities, sexual orientations, economic backgrounds. Skydivers are an incredible group of people who have a real appreciation for life itself–because you have to have one to be involved in this sport.

No matter how you like to play the game, jumping out of airplanes is so damn cool and skydivers are such awesome people. As the Manager at Skydive Perris, I get to be involved with everyone, FS, FF, WS, CReW, CP, students, and military jumpers. We’re all definitely one community at Perris, it’s great.

This is a dream job for me. If I won the lottery and never had to work again, I would still be doing exactly what I’m doing. Right here.

Us: Of all of your achievements, which one are you most proud of?

Dan: Well, I was really, really happy to finally win the World Championships after all the years and effort we put into it. [laughs] We worked hard. It’s interesting, in meeting these challenges, how much you really test yourself; how you develop, not just as a skydiver but as a person when you’ve got a goal that big. But after you achieve it, you realize that it was more the journey than the actual win that you remember with the deepest fondness.

When I look back on it all now, I am more proud of all the things we learned and friendships created along the way. Those championships and records were single moments in time. What you accomplish on the road to them lasts forever. Even if you never actually achieve the particular goal you were aiming for. Of course, having tried them both, winning feels far better than losing, but I tend to be more proud and grateful of the path than the destination.

But it’s truly what we think of as the “little things” that jumpers and especially great Instructors, Coaches and Organizers do every day that makes such a huge difference and that I’m most proud of.

For instance just last week, there were two really great guys here, and they were having a hard time passing Level 5 of their AFF progression. They had repeated the level several times and just could not stop spinning–which is not an uncommon problem for students. They were getting frustrated and losing confidence. These were two guys who were really passionate, and wanted to become skydivers but were starting to think, maybe this isn’t the sport for me; maybe I don’t have ‘it.’

Shazza, our school Manager asked me if I could take them to our tunnel. We walked up to the tunnel, flew 10 minutes with each of them and had them back up for their Level 5 within the hour. They both rocked those jumps. They got it, they got it, and it was so satisfying to see their faces afterward. In that short time, they realized a dream, and I was able to be a part of that.

So many of us have experiences like that all the time. When, as an Instructor, Coach, Organizer or Mentor we have the chance to really make a difference in someone’s life. I’m as proud of those experiences as I am of any world championship or world record.

Us: Tell us about your background in big-way formation skydiving–and where that discipline is headed.

“Big Way” skydiving is the epitome of combining the love of the sport with the love of the community. It requires amazing flying, awareness, and teamwork to bring large groups of people together in freefall (or under canopy for that matter). And few things are more rewarding than looking across the completed formation and feeling the excitement of the whole group enjoying their success. It’s a super-charged moment that you’ll remember and be able to share and enjoy with many friends for many years.

If someone has the skill to be able to dock on a 4way every time, then they are ready to start learning how to jump with bigger groups, they just need the chance. But many DZs don’t have the aircraft to do bigger ways. Or some have the aircraft but the organizers only want to jump with people who already have the experience.

The P3, “Perris Performance Plus” Big Way Camp is that chance to learn to do larger formations in a very controlled environment. We start off the first day with 16 or 20ways exiting from two planes. With only 8 or 10 jumpers in each plane, it puts everyone close to the base right from the exit. It takes the feeling of having to “rush” out of the jump and allows the jumpers to practice a smooth controlled approach and dock. Being so close also gives us the chance to break off high and practice tracking as teams, the most important part of doing large formations. The second day we do the same size groups but out of a single airplane giving everyone the chance to do longer dives and floats. Each day progresses from there usually leading to 50ish ways on the last day. By the end of the camp the participants have flown a huge variety of slots and feel much more confident and comfortable with large groups.

All the other P3 events including the 100Way Training Camp, 16 to 60 Way Sequential Camp, Spring Fling and Power Play build from there doing larger and more intricate challenging formations.

The Perris Organizers are basically doing the same every day of the week at Skydive Perris. 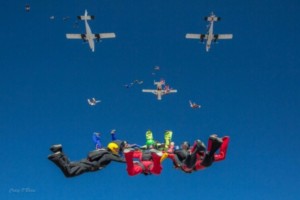 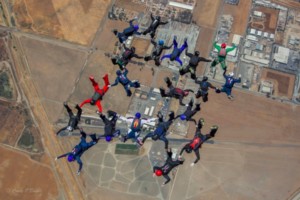 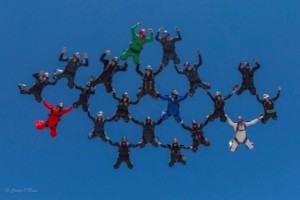 Us: Skydive Perris is hosting the USPA Nationals this year! So exciting. What are you expecting from this year’s event?

Dan: A big turnout! There are a lot of teams that will go anywhere in the U.S. for the Nationals; they don’t care how far they have to travel. But then, we also have a lot of Southern California jumpers who wouldn’t be able to travel if the Nationals were elsewhere, but they’re going to be here at Perris for the event–and all our hometown teams, too.

Selfishly, my favorite part of the Nationals scene is participating. This will be my 34th Nationals! We have a very strict rule for any formation skydiving teams training at Skydive Perris. If they are ever down a teammate and need an alternate they have to ask me first (it’s great to be able to make the rules myself ?). I don’t punish the freefly teams with the same rule. [laughs]

Us: The landscape of skydiving has changed so dramatically in the last 15 years, and you’ve seen the changes in detail. What’s your take on all of this?

I’m amazed at having watched over the last 37 years as disciplines have constantly developed and evolved. The first canopy collisions evolved into CReW. A couple of guys ran into each other, sorted it out, thought it was cool and said let’s do that again, except intentionally this time–and a whole new discipline was born. Before you know it, they’re building 100-ways. That’s how the sport evolved then, and it’s how it evolves now–curiosity about what’s possible.

Skydiving was a much simpler sport when everybody got out, fell straight down, free-fell for about the same amount of time, deployed at the same altitudes and flew the same canopies. It was way easier to coordinate then. Now you’ve got people in freefall from 30 seconds if they are doing speed skydiving to a handful of minutes if they’re wingsuiting. Some fall straight down; some go for miles across the sky. I think that sense of crowded sky perhaps contributes to the inter-disciplinary rivalries.

No particular discipline owns the sky, the sky owns us. It’s important for dropzones to figure out how all the disciplines can safely share the skies together. We’re very active about that at Perris. Even if we don’t all do each discipline, we all respect and appreciate what the others do, which makes for a really good environment on the dropzone and a better environment in the sport in general.

Through all the changes, I’ve kept my sense of wonder. Even though I may be an expert at one–I suck much more than I’d like to in some other skydiving disciplines. But I love seeing what skydivers can do, what the people around me come up with. The Perris community never ceases to amaze me.

To learn more about Dan Brodsky-Chenfeld and his inspirational story of overcoming incredible odds to become one of the greatest competitive skydivers in the world, check out his book: Above All Else: A World Champion Skydiver’s Story of Survival and What It Taught Him About Fear, Adversity, and Success.