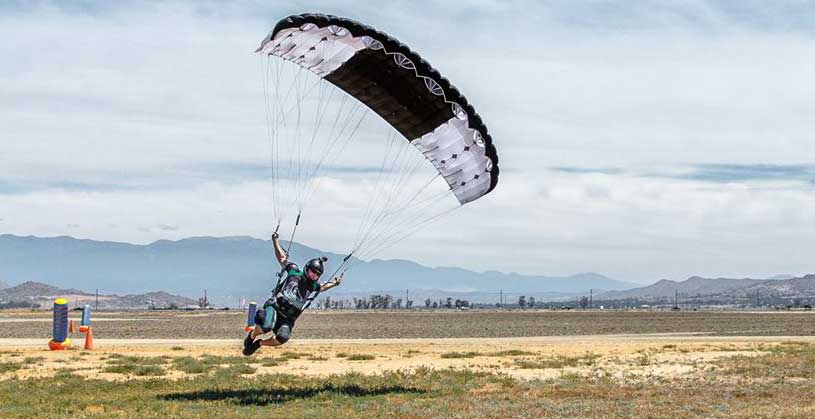 How to safely use Skydive Perris’ new high-performance landing area

In the early 2000s, Skydive Perris had been home to many competitions and the evolution of the newest skydiving discipline at the time, now known as Canopy Piloting. Canopy Piloting is where jumpers intentionally point their parachutes toward the ground and use their control inputs to recover at the right moment to glide at high speeds across the ground before touching down. Pioneering this discipline came at the great cost of many lives lost — in 2011, Skydive Perris banned any type of high-performance turn.

In 2003 the Pro Swooping Tour (originally called the Para Performance Pro Blade Swooping Competition) and the Florida Canopy Piloting Association (FLCPA) helped set the stage for formal canopy piloting competitions. This was the early days of advanced canopy flight, as parachutes had undergone radical innovations over the years and transformed from round parachutes to squares, from docile F-111 material to zero porosity, and from a square to elliptical shape. This evolution gave parachutes a higher performance and thus created a new type of skydiver known as the Canopy Pilot.

Before skydivers were canopy pilots, the act of diving a parachute toward the ground and recovering before impact created a pendulum effect and the jumper would literally “swoop” across the ground. This technique was so new it didn’t have a name, but the name “swooping” stuck and the community referred to these high-performance turns as swooping. It is a discipline that is internationally recognized. When the name swooping was retired, Canopy Piloting was born.

One thing many don’t realize about skydiving is that it’s still a relatively young sport. The first categories of skydiving were disciplines such as canopy relative work (CRW), style, and accuracy. That’s because it wasn’t until 1958 when the discipline of relative work was being pioneered (where jumpers link up in a belly-to-earth orientation). That was only sixty-three years ago! When you consider other sports such as baseball that started as an official sport in 1846, football in 1869, soccer in 1815, and basketball in 1891, skydiving is a very new sport!

The next disciplines to evolve in skydiving were freestyle and freeflying, disciplines that perfected the head-up and head-down orientations for the first time. Then wing-suiting took the sport by storm followed closely by Canopy Piloting. And most recently, angle flying is all the craze.

As skydivers pioneered these disciplines, they were not only experimenting with body flight or canopy control but also the limits of their equipment. Unfortunately, as we discovered what was and wasn’t possible, many had lost their lives and we as a community suffered. However, we remember our lost ones by paying homage to them and educating the next generation.

Now, having been a discipline for several decades and recognized locally, nationally, and internationally, Canopy Piloting created a whole new subculture that launched careers for several professional skydivers. Thus, the coaching began to excel, equipment refined, and the advancement of competitions, the discipline evolved and proved to be a viable part of our industry.

After a nine-year hiatus, Skydive Perris recognizes that this discipline is here to stay. To honor the patrons who love to jump at Skydive Perris, and with strict protocols in place, Skydive Perris once again welcomes Canopy Pilots and high-performance turns in the new High-Performance Landing Zone.

Skydive Perris has outlined guidelines to use the new High-Performance Landing Zone (HPLZ), and they are as follows:

How safe skydiving is will be determined by the individual jumper. However, we at Skydive Perris do our best to stay updated on training techniques, continuing the education of our instructors, experienced jumpers, and students, and creating guidelines to mitigate the risks the best we can. We look forward to welcoming canopy pilots back to Skydive Perris and wish you all safe skydives!