When Diane Conatser and her husband Bennie bought a scrappy, dusty airfield in the then-teeny, agrarian town of Perris, California, skydiving was the furthest thing from their minds. For them, it was all about flying aircraft. On a good day, the whole family would take to the sky: He’d lift off in the Fokker Triplane he’d built for shows, and Diane and the kids — Pat and Melanie — would follow in the family’s Cessna 170.

“Our passion was flying,” Diane explains. “He flew for the airlines and for the air shows, and he was a licensed mechanic and a flight engineer, too. We wanted to settle somewhere close to where we were living in Huntington Beach and decided to look around for an airstrip to buy where we could build a house and fly in our backyard.” She laughs. “We were only 35 at the time. We had no limits.”

When Diane and her husband first saw the Perris airfield, it was distinctly unimpressive. There was a runway, but it was full of potholes. The rest of the property was a mess of weeds, punctuated by a rusting elephant graveyard of old junk, an abandoned trailer, a smattering of hot-air-balloon enthusiasts and a single active cropduster. “We used to tell our friends,” Diane grins, “That they had to pull ten weeds before they could come into the house.”

The idea was to build homes around the runway, so they could fly in and taxi to their homes and park under their carport–a flying community. When the couple found out that the Perris airport was up for sale, they drove right out there and put it in escrow.  Their 15-year-old son, Pat, and 12-year-old daughter, Melanie, weren’t at all happy to leave their friends and the beach. It was 1976.

“We just wanted to fly,” Diane remembers. “Perris was shabby, but we just knew it could be great.”

When they closed and started to move in, they started to notice what else had come with the property: a skydiver infestation.

“We didn’t know, at first, that Perris had jumpers because their airplane was broken down,” Diane says. “It wasn’t long before we started to encounter these hippie-looking people, and my husband told me–Don’t worry. We’ll get rid of them right away.”

The airstrip manager explained that they were parachute jumpers, but they hadn’t had an airplane for a while. It clearly didn’t stop them from coming around.

Diane’s husband, right away, made an arrangement with the old owner to bring in a gorgeous plane for them. “Almost immediately,” Diane winces, “A girl hit the tail with her parachute and took it out. I don’t know if it ever got fixed.”

With that plane out of commission, the couple–who clearly hadn’t spent much time around skydivers, yet–bought a really beautiful Howard as a jump plane. “It was really pristine,” Diane opines, “With a plush red velvet interior. Of course, with the parachutists, that didn’t last very long.”

At this point–just 1977, pretty much right after the purchase–Perris’s skydiving community was already beginning to balloon. The Howard wasn’t big enough to support the parachuting club, so the couple “just kept buying bigger airplanes”: Beeches; DC3s; a Skyvan; a Twin Otter. They dug a swimming pool. They built bathrooms, but they couldn’t afford a roof for them, so jumpers would fly overhead and catcall down to their friends inside. Diane and her daughter set up a little trailer where they sold hot dogs, barbecued beef and tuna sandwiches.

“We wanted the airport to look islandy,” Diane giggles, “So I nailed palm fronds all around the top of it, like it was on some island out somewhere that was deserted, which was just about right.”

As it turns out, the area was deserted for a good reason. When the couple bought the airport in 1976, there was no law requiring the disclosure of, shall we say, key information about the land. “You didn’t have to disclose if you are in a floodplain,” Diane explains, “So, when we went to see about building hangars and such, we found out that we couldn’t build anything unless it was on stilts. In Southern California. Who would think?”

“One time,” she continues, “The Ramona Dam broke. And in the manifest, we were waist high in water. When we looked outside, we saw that the skydivers were going up and down the runway in a little boat. Even in all that, no one was mad in the flood. You make the best of it–skydivers have that attitude. If the drop zone is flooded, just get a little boat and keep smiling.”

“You know that’s why we like it,” she laughs, “Because there’s no old grind or anything. It’s always something different around here.”

The jumpers–naturally–wanted a bar, so the intrepid dropzone owners pulled an old abandoned house trailer from behind the airport building, added a little portable on the end of it for a restaurant-bar.

“There was no money left after buying airplanes and fuel,” Diane laughs, “So we mixed old paint, camouflaging the buildings to look like a bomb shelter. At that time people were concerned about being bombed by the Russians, so it made sense. We had good food, cold beer, a loud jukebox and a dirt floor. We kept it nice and warm with a borrowed orange grove heater. The jumpers called it ‘Puff’ because, like Puff the Magic Dragon, it would build up smoke and make a loud booming sound to clear itself out.” 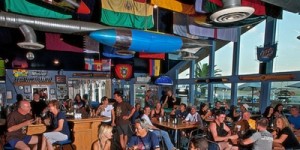 Over the years, that little shack evolved into the Bomb Shelter–Perris’s on-DZ bar and restaurant. Today, it’s a big, cheerful space with pictures covering all the walls. Diane, as she is quick to note, framed and hung every single one of those pictures herself.

“It all just snowballed,” Diane smiles, “And the jumpers, being so nice, gave us so many ideas. Oh my gosh, I was just so totally impressed by skydivers. And I still am.”

One of those ideas–to start hosting boogies–is still very much a part of the Perris ethos. The burgeoning DZ started having boogies for all the major holidays: Thanksgiving, Easter, Christmas. They started hosting courses and competitions. Teams started springing up all over the dropzone, and a couple of them won the gold at the world meet.

“There was always so much going on. We attracted some good people,” she continues. “Pat Works, for instance. Such a visionary, Pat. He was teaching relative work and sky dancing. He actually started [the discipline of] free flying. We had a guy named Billy Reed who would train people out at some bar he went to in LA. He’d train them at night and bring them up the next day to jump, so we would have 100 in the class on Saturday. Then a couple of other people, Jerry and Pat Swovelin also and Bob Buehrer, started the New Dimensions Flight School. It was the first organized school to teach the piloting of square parachutes. We were so proud of our teachers. Still are.”

For all the magic, the little DZ was not without its rough moments. In 1985, after one DC3 was chopped in half by the propeller of a Cessna (whose pilot was under the influence) and another DC3 threw a propeller blade and burned up on the runway, Diane and Bennie had had enough.

“We made ‘The Party’s Over’ t-shirts and moved back to the beach,” Diane says.

Soon afterward, Perris got a second chance. The couple leased the drop zone to a group of nine successful skydivers: The Perris Valley Skydiving Society. Thanks to those men, Perris is still a DZ.

In 1989, there was a changing of the guard. Diane and her husband stepped aside–not entirely, but somewhat–to let their kids step up to the plate. Son Patrick Conatser and daughter Melanie Peschio–who has about 6,000 jumps and is a founding member of  the 8-way team Perris Passion 8–took over the dropzone’s daily operation. They’re still going strong. These days, Diane’s grandson wields a wrench in the hangar after school, just like his dad before him. 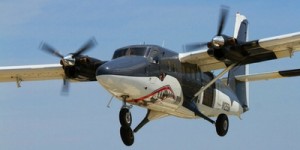 Pat and Melanie have been partners in the dropzone for 27 years running. Pat is a “super mechanic,” following closely in the footsteps his dad. (Both hold FAA Mechanic and Inspection Authorization Licensees.) Pat has an artistic streak, too; he painted striking sharks on both of Perris’s DeHavilland DHC6 Twin Otters–one gray, one blue. Those shark airplanes are world-famous, now–recognized by skydivers all over the planet.

Melanie’s side of the partnership steers the direction of almost everything else. Along with the superb assistance of Manager Dan BC, she sets an upbeat, positive, professional tone in every aspect of the DZ. Melanie is learning to fly her DC3–and will be loading it up with happy jumpers on Perris’s upcoming anniversary weekend.

Bennie has certainly not flown off into the sunset, either: he is getting the DC9 ready to fly by Nationals at Perris 2017. 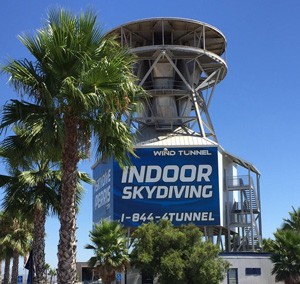 Perris has always been on the forefront of the American airsports scene, so it’s no surprise that they were among the first in the world to enter the world of wind tunnels. In 2001, after traveling to Orlando to see the original, the couple decided to build one.

“The owner, Bill Kitchen, didn’t want to sell it to us,” Diane laughs. “I had only wanted to build it down by the airport for skydiving training, but he insisted that they’re meant for malls–that we wouldn’t ever get enough business.”

Bill was partly right and partly wrong. Perris opened its tunnel in 2003, and has introduced countless numbers of skydivers and non-skydivers alike to the joys of bodyflight. These days, every drop zone would love to have a wind tunnel snuggled up to its hangar.

From talking to Diane, you really get the feeling that everything the extended Perris family does is about the pursuit of joy.

“In the ‘70s,” Diane smiles, “Our motto was ‘The Fun, Friendly Drop Zone that Cares.’ We didn’t know anything back then, so we were an open canvas, but we wanted people to know what we were about–and that’s exactly what we were about then, and still are now. We were so appreciative of the people coming out to Perris. Even to this day, everybody who comes feels like family.”