Imagine living in Japan: skydiving is expensive, not as accessible, and you have a dream to fly a wingsuit. Most countries recommend a minimum of 200 jumps before making a wingsuit jump AND that you need appropriate training in order to do so. In Japan, there were hardly any wingsuits, let alone wingsuit coaches. This is the story of Wakita Nozomu. He decided to leave the comforts of home, fly to the U.S. with a small pile of cash, borrowed skydiving equipment, and a BIG dream.

When Waki arrived to the US, his first stop was Skydance Skydiving where he earned his A-license. As he went through the program he befriended Shin-san who advised him that Skydive Perris should be his next stop as they had a dedicated wingsuit school and people that could help him achieve his goal. Waki had 37 jumps and headed to Perris.

When Waki arrived at Skydive Perris, he bought a tent and cheap food then camped out at the dropzone. He had minimal things because he was saving every dime for jump tickets. The desert nights were cold, but Waki didn’t complain. He held his head high, mustered up the energy leaving what warmth of the tent had left and readied himself each day.

Waki was making as many organized jumps with the local organizers, absorbing as much information as he could. He had 2 months to complete his mission before heading back to Japan. Once back home he was to start school and wouldn’t be able to jump for over a year. He was determined and set on course. But that’s when the weather hit.

Waki did what any skydiver would do when trying to reach a desired jump number. He showed up every day waiting out the weather and did hop-n-pops when a break in the weather rolled in. Even though Waki was running out of time, money, and not logging enough jumps, he remained positive, greeting everyone with high fives and hugs.

One day a friend named Priscilla, who always greeted Waki with a hug and a smile, loaned him a blanket. This generous act fueled Waki’s energy and kept him warmer at night. Another night at the bar Waki was hanging out by himself. Dupuis happened to walk in and see Waki sitting alone. “Can I buy you a beer?” Dan asked. The two chatted it up all night and began a friendship, talking about Waki’s goals to wingsuit and his obstacles with weather and running out of money and time.

A few days later Dan Dupuis was walking back from the landing area and someone approached him, “Are you going to take Waki up for a wingsuit jump?” Dan was puzzled by the request and instantly had a few ‘red flags’ at the idea. He quickly evaluated that Waki hadn’t had enough jumps, was doing many hop-n-pops (which isn’t the best route to accumulate jump numbers for wingsuiting since the freefall portion is equally important as canopy piloting). Dan approached one of the load organizers who Waki jumped with most. Surprisingly, Waki got a rave review.

Not even five minutes later Dan was asked again by another jumper, “Are you going to take Waki up on a wingsuit jump?” At this point Dan’s curiosity was piqued, so he asked another load organizer about Waki to see whether his ‘red flag’ intuition was right or not. The second load organizer gave Waki a glowing review.

By now, Waki had one day left and 2 more jumps to go before he hit 200 and the weather forecast didn’t look great. Not only that, the next question Dan had was whether Waki’s gear was appropriate for wingsuiting. After thoroughly reviewing his gear, it passed inspection.

Wingsuit coach, Dan Dupuis, agreed to meet Waki at the DZ in the morning to start training, even though the weather did not look good for the entire day. Dan planned on 2 tracking/evaluation jumps prior to doing a wingsuit jump, which would give Waki a chance to prove he could fly safely in a wingsuit, and earn the jump numbers to do it. Waki crossed his fingers that the weather forecast was wrong as he had three more jumps to do, and a plane to catch the following day.

The morning was greeted with low, overcast clouds unfamiliar to California as the state has been in an intense drought the last few years. The pair showed up anyways and did the training and waited, and waited. Manifest made an announcement that they were going to try for a load as there was a break in the weather. The pair manifested and anticipation grew.

The jump went phenomenally. Dan was blown away by Waki’s stability, directional control, and speed in his track! Waki was glowing, and Dan’s red flags disappeared and the duo manifested for the next possible load to get in the second evaluation jump. This time Dan planned a tracking jump that included freefall pattern work – a crucial element in wingsuit flying.

The weather held as they went up for the second evaluation jump. Waki remained focused and his freefall skills were controlled and precise, which again impressed Dan. “He’s ready for the wingsuit,” Dan thought to himself. The duo planned the jump, hoping the good weather stayed a bit longer and manifested for the next load. The entire drop zone had been befriended by this young, enthusiastic man, and they stood around cheering him on.

The load departed. On that plane was a determined young man with a dream. Waki had a passion for wingsuiting ever since he saw it as a young boy. The months of cold nights, ramen noodles, and bad weather had led to forming incredible relationships that included: Senior Shin Ito-san, who help Waki stay motivated when he felt most alone; his wingsuit coach (Dan Dupuis) who bought him that first beer, offered friendship along the way, and a willingness to train him; and the random person who paid for two nights in the bunkhouse which was such a cool, uniquely American experience for Waki to have.

Waki was calm as he approached the door with Dan. He went through his exit procedures, and there in his bright yellow student Squirrel Hatch suit, Dan watched and followed with confidence as Waki was greeted by the cool wind and stepped out of the door. And there he was, flying a wingsuit. “He was a bullet and did amazing,” recalls Dan. 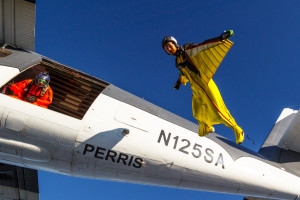 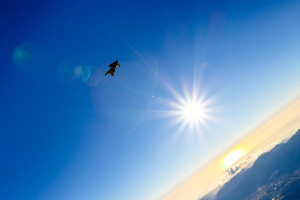 Waki hooted and hollered the whole freefall and canopy ride. He just couldn’t stop beaming and even continued hollering after he landed with immense pride. As Waki recalled his story sitting at school, he couldn’t help but remember all the people and often thinks of and misses them most. “I couldn’t jump wingsuit without everyone’s help! They treat me as sky family!” he said. You could hear the smile in Dan’s voice when he recalled Waki’s time at Perris, “He was the happiest guy I had ever met.”

When Waki was asked what his biggest lesson was from his time in the U.S. he simply said, “Never give up.”

He did it – Waki’s dream came true.

Waki wanted to make sure to give love to the people who helped him. He says, “Thanks a lot again!”