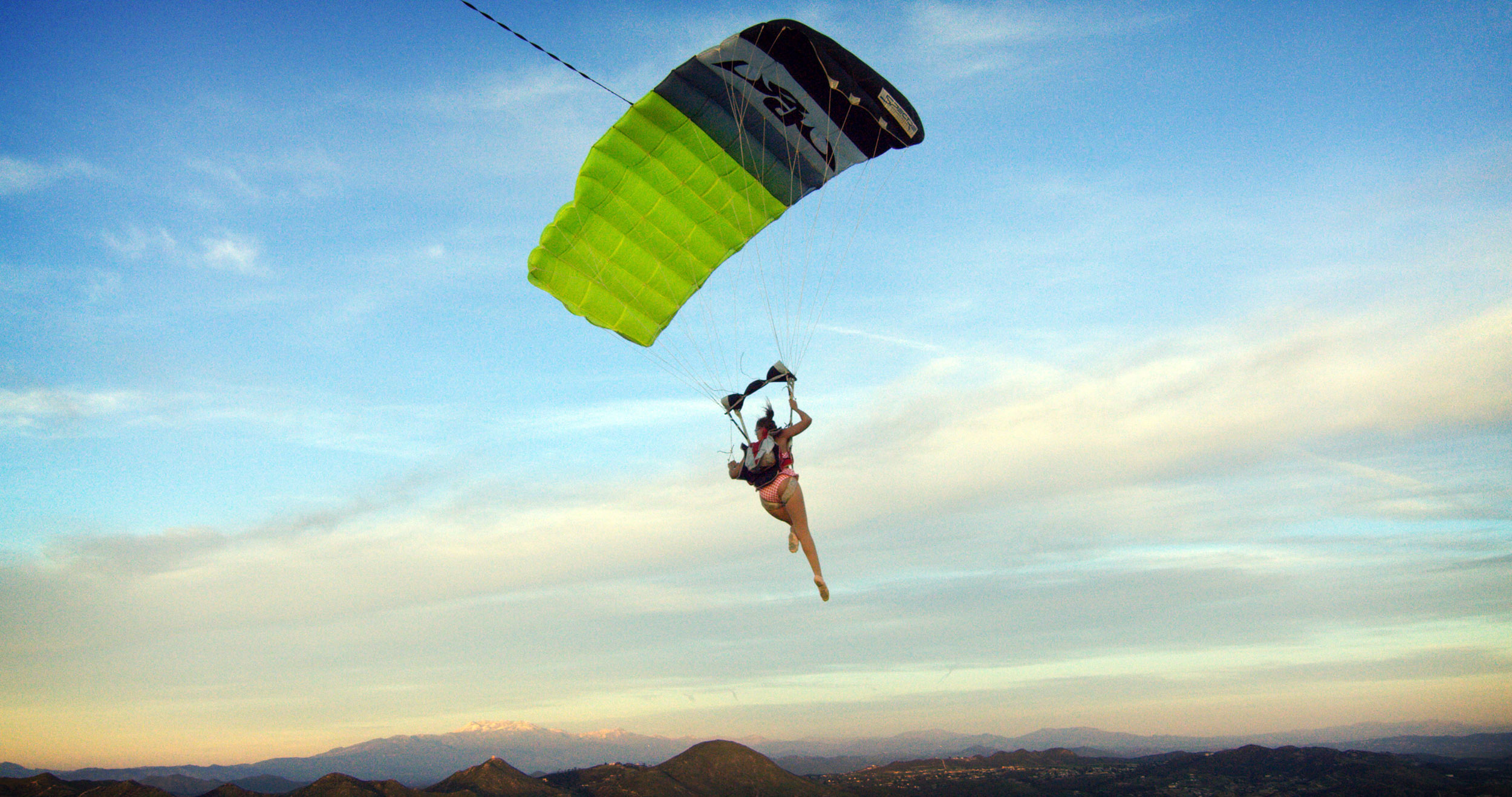 If you’ve ever thought about jumping out of a perfectly good airplane and you’re the type who likes to know how things work in order to quell your nerves, you may have found yourself wondering how skydiving parachutes work. How does a bunch of fabric along with some paracord suspend your entire body weight? What does a skydiving parachute even look like? How exactly does it all function?

We think it’s important to know that skydiving parachutes used today have come a long way from their first design centuries ago. The great artist, Leonardo DaVinci was credited with creating the first parachute. However, the first parachute jump wasn’t made until the 18th century and even then, the design had already changed from a triangle to a round parachute. Fast forward to today and you’ll find the military still makes use of round parachutes. However, sport parachutes such as the ones used here at Skydive Perris, are rectangular in shape. Regardless of the shape though, all modern parachutes work the same way.

The Physics Behind Parachutes

To try and simplify physics a bit, parachutes make clever use of air resistance. Essentially, the larger the surface area you have, the more air resistance you’ll have. Parachutes take advantage of this because they are often made from lightweight nylon that has been specially treated to let very little air through. This allows the parachute to create more resistance so it will drift toward the ground slowly and safely.

Most people have probably seen images of the round military parachutes. These are rather difficult to effectively control and jumpers essentially are at the mercy of the wind in terms of where they will ultimately land. However, skydiving sport parachutes as well as BASE jumping parachutes are rectangular in shape and are much easier to steer. They also offer more braking power than round parachutes so landings are much softer, much like sliding feet-first toward a baseball base.

Do Parachutes Ever Not Work?

We’ve heard many fantastical stories where someone’s parachute didn’t work, whether it was in the news or a friend of a friend of a friend. Because of this, we often get asked if parachutes ever don’t work. The short answer is no and yes. Confusing, right? More often than not, when you hear that a parachute didn’t work, it likely inflated and then there was some sort of issue where the skydiver chose to jettison their main canopy and deploy their reserve. It’s actually pretty rare for a parachute to not come out of the container but if that were to happen, all of our containers have a little computer that will automatically activate the reserve parachute at a pre-determined altitude if the skydiver doesn’t react in a timely manner. Technology is amazing, right?

Now that you have learned a good bit about how parachutes work, we think it’s time for you to come try one out for yourself. We are happy to show you our gear and take you on a flight through the skies so you can really test it out. Contact us today!